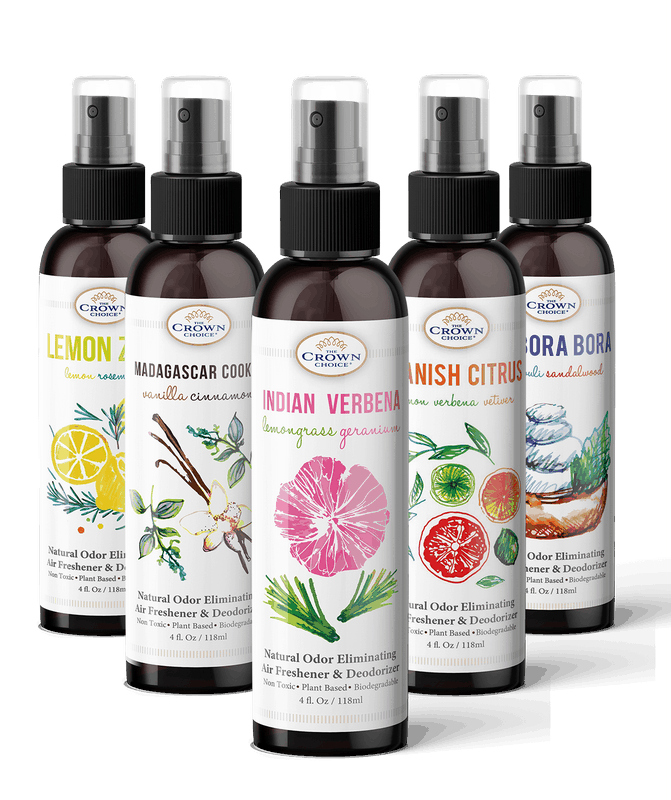 30 day no question money back guarantee

Read why people rave about our sprays

Learn why we offer the best natural essential oil sprays

Enjoy the long lasting aroma of our all natural essential oils air freshener and room deodorizer.

Our active ingredients are pure and natural essential oils that safely attract and neutralize even the strongest odors like pet smells and smoke.

Non-toxic with NO artificial perfumes or fragrances or chemicals, and NO animal by-products. Non-toxic to children, pets and the environment.

NO synthetic colors or contaminants in our Room Spray. Specially formulated essential oils to absorb, neutralize and dissolve or eliminate odors naturally instead of masking like chemicals and synthetics like most big box names.

Freshen up any room or area

Our natural air fresheners are perfect for:

this works well in keeping cats away from furniture and plants-- the lemon zest is the key.

Not as fresh as I'd hoped

Was hoping for something fresh and citrusy, but instead it smells like a strange citrus furniture polish. Probably shouldn't buy any item online with a scent that you can't "preview". My bad.

Nice fragrance. Wish it lasted a little longer but good

The best smell ever

I have tried a million scents and most just disappear in seconds or just don’t have a great smell. This product is lovely, has a fresh lemon smell and lingers for quite some time.

I love these air fresheners. They have a light natural scent - no heavy chemical smell. And even though the scent itself doesn't linger very long, it eliminates the bad odor which is exactly what I was looking for. I didn't want just a perfume-y cover up. You only need a couple of sprays so even though the bottles are small they should last a while. I will continue to buy these. I got the Madagascar Cookie (smells like a cinnamon cookie) and the Indian Verbena (smells lemon-y) and they are amazing.

These were purchased for the bathrooms on our floor at work. A non-toxic, fresh smelling restroom is a happier place to visit!

We like it when the sprayer works. Difficult to get it to spray a mist, often drips. But we like the product and it does work

Try our other natural air fresheners

30 day no question money back guarantee

Fall in love with it within 30 days or you can get a refund.*

*Minus shipping & handling, when applicable.

Is this oil air freshener safe to use for people with asthma?

Yes. Its natural ingredients are gentle and free of harsh chemicals like pthalates. it’s even safe to use when pets and children are around.

How did you make this air freshener?

We believe that the best oil air freshener should be made using natural ingredients. We have a proprietary blend of essential oils combined with a fermented product of yeast that neutralizes most odors and is safe to use on a person or around your home/office/car.

I heard you’re using preservatives. How is this natural then?

These products are preserved with coconut derived ingredients. For preservatives, we have a blend of naturally derived ingredients for keeping products microbial-free and stable while providing additional conditioning properties. Contains natural caprylic acid and lauric acid (made from coconut oil fatty acids) and propanediol (made from renewable corn sugar fermentation which is natural, skin-friendly preservative-boosting humectant for all kinds of formulations).

Is this product cruelty free?

How long does it last?

Depending on the scent and the room.

Spray in a sweeping motion 3-4 times for a good scent.

Is this packaged in a glass jar or plastic?

Is the smell too strong? Is it too weak?

Can this work like poo-pourri? Sprayed into the can before number 2?

Yes. Poo-pourri is basically essential oils. You can do the same thing with our spray. Spray it about 4-5 times to give it a good coating on the top of the water.

Can this be used on fabrics like a sofa?

Is the bottle refillable?

Yes. You can refill the bottle with water or some liquid fragrance that you have at home.

Does this have alcohol?

No. The liquid contains cassia, vanilla, litsea, natural deodorizers, and natural preservatives. It also non-toxic and has no contaminants.

Can I use this on my Yoga mat?

Absolutely! People use this on their curtain sheets so it shouldn’t be a problem with this.

What’s the size of this thing?

How many items are in the package?

This Essential Oil Air Freshener Set (5 pack) includes one of each natural scents we have:

ALL NATURAL INGREDIENTS: No toxic, harsh chemicals. Can be used by highly sensitive people.

If this is the best natural oil air freshener, why use preservatives?

You can compare this with salt preservatives during the galleon trade era. Salt is not chemical-laden but works just as well to preserve the food of seafaring adventurers for months!

So we do use natural derived preservatives on our essential oil air fresheners.

Brands that claim they don’t use preservatives are lying because their products won’t last a month on the shelf before going bad. It’s actually against regulations to make false claims. Every product uses preservatives. Such companies hide it inside the ingredient.

Makes sense right? If a product is natural, then by nature, it will rot within a week or so. For a product to last 2 years on the shelf, there is a preservative.

Our best natural oil air freshener is made from plant-based products. For preservatives, we have a blend of naturally derived ingredients for keeping products microbial-free and stable while providing additional conditioning properties.

The stuff that keeps it fresh is derived mainly from coconut oil fatty acids.

In an SMH Australia article written by Sarah Berry, she points out the idea that “…things labeled as natural fragrances may not be any better for our health.”

She’s not wrong about this.

In the same article, she said that “One teaspoon of natural rose oil costs about $300 whereas a kilo of synthetic rose fragrance costs about $200.”

We put on our label that our formulation use ingredients that are pure and high grade. And this is not just a marketing term.

We don’t take this lightly because we’re not out for a quick buck. We want to give our customers products that will help them, not harm them.

The synthetic smell of aerosol sprays is just irritating & FAKE!

Aerosol propellants alone are harmful to humans and the environment.

To top all of that, the fake fruit/flowery smell of air fresheners just mask the odors.

We have a proprietary blend of essential oils combined with a fermented product of yeast that neutralizes most odors and is safe to use on fabric inside your home , office or car/boat.

The difference between masking & neutralizing odors

Direct 365 UK says that aerosol sprays are designed to mix with fragrance molecules when released.

It covers up odors using a STRONGER smell.

What ends up happening is that you end up spraying too much to try and cover up the existing odors.

Not only does it create a nasty concoction, spraying too much aerosol air freshener mist increases your exposure to harmful chemicals. While constant exposure to chemical mists is not immediately harmful, it’s a slow but consistent health risk.

This information was glossed over in the same article but I think it’s worth pointing out here: Strong smells of chemical-laden air fresheners numbs your nose towards all smells!

People who’re used to the strong fake smell of regular sprays will find our product to have a weaker smell. We don’t offer something that will knock you out because of how big and strong and overpower it is with the gases and synthetic fragrance.

With our proprietary blend, it is a natural way to eliminate odors.

Our special liquid formulation attracts and bonds with the odor molecules in the air. When the spray mist dries up, there’s a yeast ingredient that encases the smelly molecule thus keeping it from stinking your home.

It acts the same way as industrial strength odor eliminators. Except our product doesn’t use chemicals that will give people and pets long term health problems.

Do you want to mask or eliminate poo odor?

Well, I think the answer is you prefer to get rid of it. Not hide it under something else.

Poo smell is unpleasant and we’d rather eliminate it rather than hide it for somebody else to find.

Fortunately, our product can give your toilet a great smell while eliminating the odor of excrement.

Spray the toilet 4-5 times before you go. Then after, spray it again on the top layer to trap in the unwanted smell.

Here are the step by step instructions.

1. spray our air freshener in your toilet bowl before pooping. The oil-based ingredient will act like a top layer because essential oils will float on the water and create a seal.

2. Spray 4 to 5 times to get an adequate coating on the water if your toilet bowl.

3. When you have finished your business, spray 2 times into the toilet again to create another invisible seal.

4. The oil coating will seal the poop smell so you can flush away unbothered when you’re done.

Why our oil air freshener is the best

If you’re looking for natural and organic we are the best choice.

1. We use the highest grade and purest ingredients

3. We don’t test our products on animals

4. The liquid fragrance is essentially oil based so it’s biodegradable

5. The fragrance types of our product are appealing and sophisticated

6. It’s gentle you can use it even when kids and pets are around

7. The natural smell is strong ENOUGH a small amount goes a long way

8. The product is earth friendly

9. The bottle is handy you can bring it in your office/car/boat

10. It neutralizes odors not hide it

You can try one bottle for yourself and if you love what we do here you can try the 5 pack.

We have 5 bottles of all our fragrances.

ALL NATURAL INGREDIENTS: No toxic, harsh chemicals. Can be used by highly sensitive people.

All of them offer different types of fragrance. You’ll love all of them and you’ll definitely have at least a couple of favorites after you try them all.